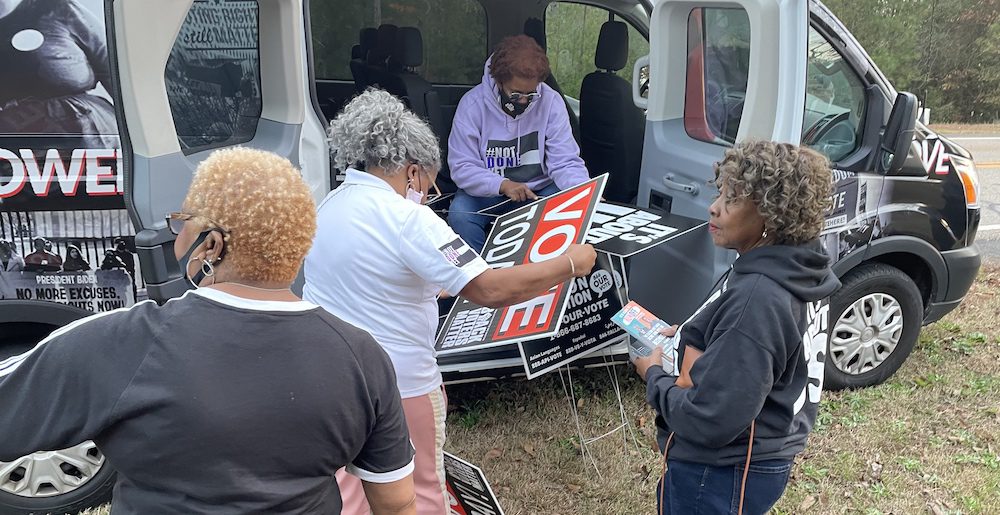 Andersonville, Ga. – Late Tuesday afternoon, there were more barking dogs than people to be seen among the weathered homes on the outskirts of Andersonville, a small town in southwest Georgia known for its infamous Civil War prison.

But the quiet did not stop Tammye Pettyjohn Jones, who chairs Sisters in Service of Southwest Georgia and works with many local non-profit groups, and a caravan of like-minded community activists, from looking for Black voters to remind them of the U.S. Senate runoff and urge them to vote.

and new slogans such as “WE WON’T BLACK DOWN… cuz freedom is our birthright!” pulled off the road in front of every cluster of homes. At a set of old duplexes, the smell of a leaking gas pipeline hung in the air – a health and environmental hazard.

Undeterred, teams of women who have lived for decades in the area fanned out with voter guides, cards reminding voters that a senator could help disadvantaged people and lawn signs saying Black people have power. Jennifer Watts, a Sumter County public defender dressed in a crisp white jacket, saw an elderly man at his door and started talking as she walked over. Charlie Hill stepped onto his porch.

“Early voting has started. It started Monday. It goes through Friday,” Watts said. “You can go to Americus to vote early, or you can wait until the actual Election Day, December 6.”

Hill said little more than “Okay.” “We’re out telling you about this election and making sure everyone is registered,” Watts continued. “Are you registered?”

He nodded and then saw that his cousin, Nanette Hill, was among a handful of women handing out the information. Then he started talking and joking.

“So, you’re related to Kurt and all of those?” Watts asked. “Well, tell your family and friends about the voting.”

“We’re doing it,” he replied, sounding like he would vote in the runoff.

Across Georgia, the candidates, incumbent Sen. Raphael Warnock, a Democrat, and Herschel Walker, a Georgia football legend and Republican, and their parties are spending millions on a final round of messaging that smears their opponent. The runoff was triggered because no candidate won more than 50 percent in the general election. With nearly 4 million votes cast, Warnock led Walker by only 37,000 votes, elevating the importance of turnout in across rural Georgia. The state has 159 counties, of which perhaps 100 are outside of its metro areas.

The mission and messaging exemplified by Jones’ team is different. They and other civic groups throughout the state hope to engage registered-but-reluctant voters by outreach that emphasizes personal ties, local concerns, and solutions. In the short run, the activists are focused on the runoff. Their long-term goal is engaging voters to make conservative-led counties more representative.

“It is especially important to empower these Black Belt counties and for minority voters in these ruby red counties to know that their votes do matter,” said Ray McClendon, NAACP Atlanta political action chair. “If we can pick up 1,000 votes in this county and 1,500 votes in another county, although it will look like it’s Fulton or DeKalb [counties in metro Atlanta] that put [a winner] over the top, it really is the aggregation of these counties that went from ruby red to purple that made the difference.”

But it all hinges on convincing more people that voting matters.

“The dogs keep on barking, and they just keep on talking,” said Jones, smiling at the canvassers. Jones, a Tuskegee University graduate, and chemical engineer, is overseeing voter outreach in several counties centered around the small city of Americus, near Plains, where former President Jimmy Carter lives.

As the twilight deepened and a half-dozen lawn signs saying, “Black Voters Matter,” “Vote Today” and “It’s about us,” were planted in a town that was the site of the Confederacy’s notorious Civil War prison and later home to a national cemetery, Jones yelled, “Let’s go. The sun is going down.”

One fifth of Georgia’s voters live in its rural areas. Jones explained why rural organizing is different than in metro areas. To start, people are spread out over large areas, and it takes time to visit them. Many rural voters also do not have access to the same media and information sources as voters in metro areas.

In much of southwest Georgia, there are no local TV news departments or daily newspapers, Jones explained. The Internet is spotty. Not every home has cable TV. Those factors elevate the role of attention-grabbing efforts like motorcades and knowing how to engage voters.

“The main message is to let our rural people know there is a runoff,” she said.

Jones, like many organizers, is running phone banks and help hotlines. She also has created events, like a basketball tournament on Saturday, Dec. 3, where everyone who shows up will first hear a brief presentation on how and where to vote. They will get shirts printed with a QR code that takes viewers to an online “Georgia Runoff Voter Guide.” The multilingual guide has information on local voting options, locations, hours and a summary of the candidates’ positions.

Behind these visible efforts are data-driven analyses to pinpoint pockets of unengaged voters and digital tools that make it easier for voters to register and get a ballot into their hands.

Robinson, a tall, broad-shouldered man not yet in middle age, saw someone getting into their car and walked up the driveway to the driver’s window.

“How you doing sir? We want to give you some information about voting… Are you planning to vote,” he began. When the man tentatively replied, “Uh, I might,” – which probably meant that he wasn’t – Robinson took another tact.

“Do I know you? Where do you know me from,” he asked, taking a friendlier and a less business-like tone. Cedric Hurley, 37, replied, “from school.”

Robinson asked Hurley if he was registered and when he last voted. Hurley didn’t quite remember. Robinson said he could check. He asked if Hurley wanted to use his phone to go to a state website to find out. Jones joined the conversation.

“It’s real simple,” she said, asking Hurley if she could use his phone for a minute. She entered the initial of his first name, last name, county, and date of birth.

“Yes! Your name’s Cedric, isn’t it? You’re registered,” she said. “You can go this week for early voting. Take your ID.”

But then Jones paused. She saw that Hurley was listed as an inactive voter, which meant that he had not voted in several years. She explained what that meant.

“You just go down here, to the old Sumter County fairground, tomorrow, Thursday or Friday. Take your ID. You can vote. They’ll just lift that immediately off and make you active again,” Jones said.

“You want me to go with you, Cedric?” Robinson asked. “Oh no,” he replied.

This personal touch, known as relational organizing, and tools such as checking one’s voter registration status online, have evolved since 2020, when Georgia’s two U.S. Senate contests also went into runoffs.

In 2020’s election and runoffs, a coalition of older civil rights groups led by NAACP Atlanta and newer groups such as Black Voters Matter made a deliberate effort to collaborate – instead of duplicating efforts. Other civic groups, such as Black fraternities and sororities, and professional organizations such as the Masons, who have chapters across the state, participated.

In 2022, those efforts have grown. In urban areas, such as the counties around Atlanta, groups like the Center for Common Ground have identified every precinct where at least 40 percent of registered Black voters have voted, said Monica Brown, Ph.D., a social science researcher leading that effort.

Metro Atlanta’s Cobb County was her top priority. “They have the most ‘super voters,’ but they also have the most inactive voters,” Brown said, interviewed in a parking lot after giving volunteers door hangers to put up in underperforming precincts. The literature listed voting options, locations, instructions, numbers to call for rides and other help, as well as issues that mattered to more suburban voters.

In southwest Georgia, where there were fewer voters, Jones said the targeting was different. She focused on reaching voters in county commissioner districts. That would “hold the line” for the Senate runoffs and nurture a base to elect more responsive representatives in future local and state elections. 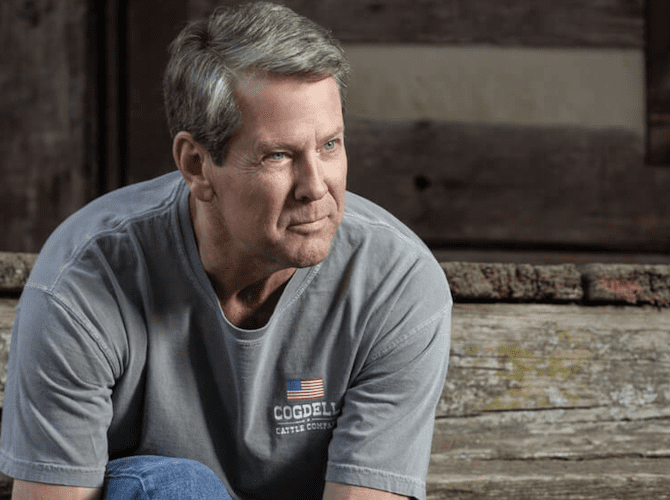 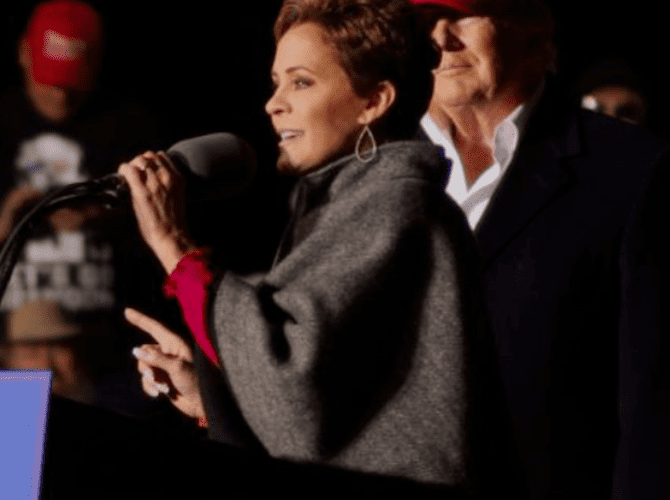 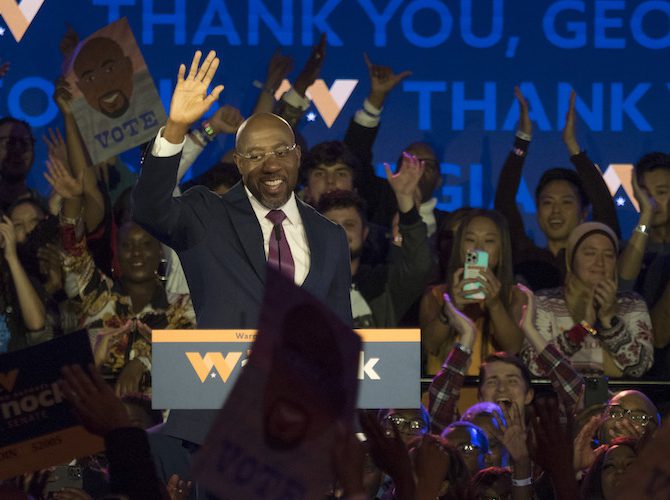 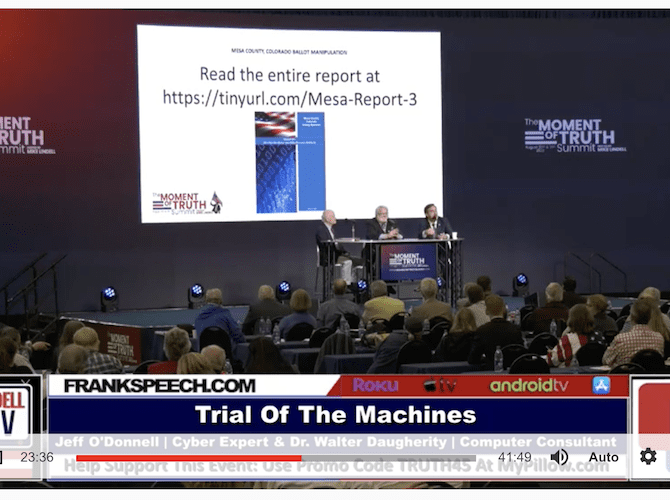